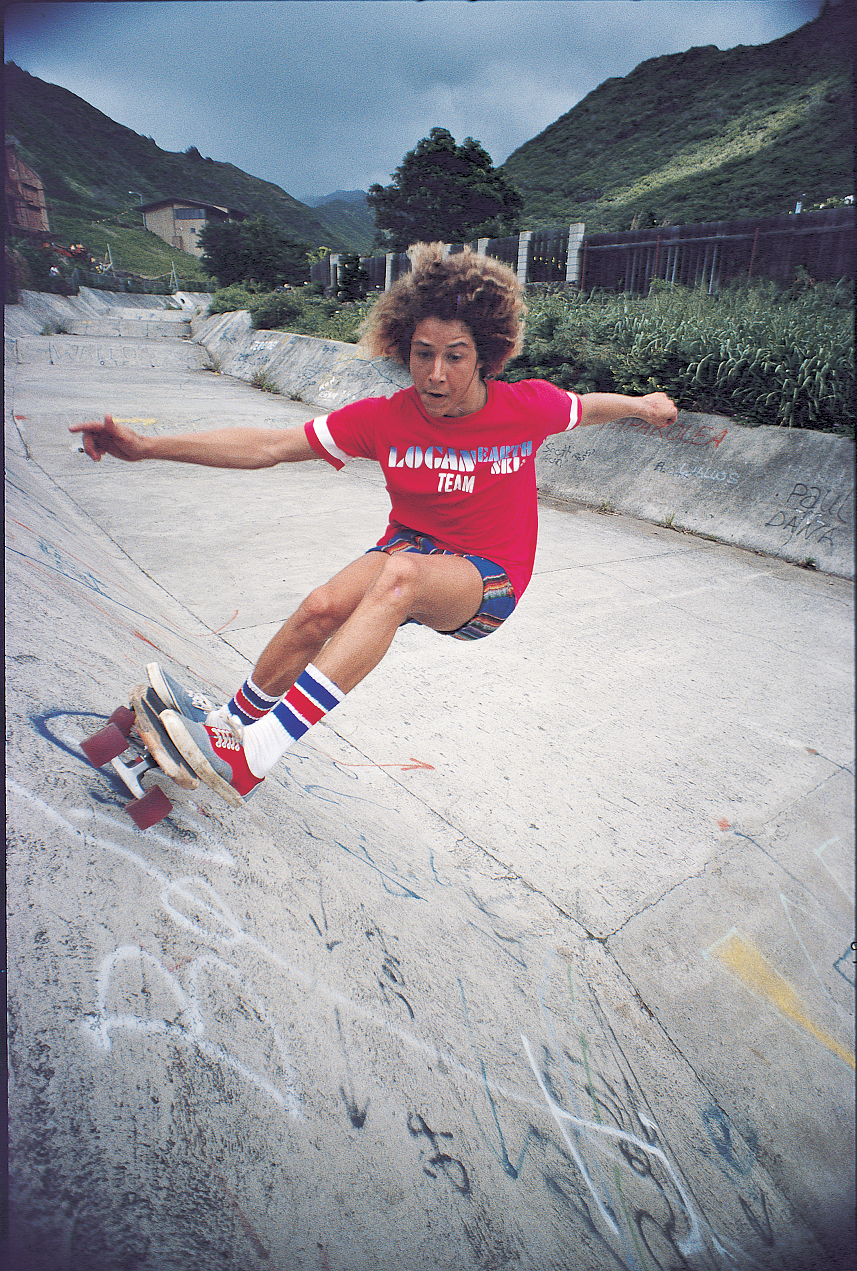 The freeway was a blur of chrome and metal. Rushing. Frenetic movement. Everyone hurtling to nowhere. Tony Alva and I nimbly moved through traffic. We were going to skate a pool. As reggae music washed over us, I idly wondered just how many times in his life, TA has been in exactly the same situation. California, good music, sun-splashed days, a car loaded with
skateboards… probably quite a few I surmised. TA has been a skateboarding icon for decades. For many people, TA and skateboarding are one in the same. It is just as true that when one thinks of pool skating and surf style, Tony Alva’s name must be right there at the pinnacle of the
list. It’s a symbiotic relationship. We simply cannot have one without the other. They directly flow… TA started skating in Los Angeles when the surf was flat. It was a way for him and his friends to have fun. They emulated surfing. Berts, laybacks, surf style. TA admonished – “Style
was everything. Tuck low, speed carve, cut back. If you didn’t skate with style, why do it?!” With his long fingers resting on the steering wheel, a dreadlocked TA kept up a fascinating dialogue on his surfing roots, his early influences and where he comes from. “I was surfing as often as I
could. When I wasn’t in the water, I was skating. We were riding the banked school yards…
Kenter, Revere and others. Around this time, we also started riding pools. There was a drought going on and this led to many pools being emptied. We would hop fences and walls. We were little urban guerrillas. We rode pools all over LA, Beverly Hills, the San Fernando Valley and even down into San Diego.” I briefly showed TA a Warren Bolster image from 1976 or so. I
asked him if it was the Soul Bowl over by the college campus in San Diego. “Oh yeah… Look at that. I haven’t seen photographs of that pool in a long time” TA quickly glanced away from the image and then banked the car onto an off ramp. Trash carpeted the filthy sidewalk. Bums
cluttered the underpass begging for coins. Dirty. Disheveled. TA mumbled something about being grateful. I nodded in agreement as we moved through traffic to a better part of town. We pulled in at a Japanese restaurant and went inside. Taking a seat, we soon ordered and then
started looking at the Soul Bowl images.

TA was chuckling under his breath. “Look at the gear! I’m wearing one Vans shoe and one Makaha shoe. This was when I was on Logan Earth Ski. Torger Johnson was a huge influence on my skating and through Torger, I met Bunker Spreckles. Bunker was the step son to Clark Gable. Bunker was wealthy, surfed, traveled the world and lived larger than life. He really knew how to roll! Anyway, our crew would ride pools all over. We would go down south from LA, we’d surf and then ride local spots.” TA pointed at an image of himself balanced precariously on the tiles of the Soul Bowl. A huge green palm tree stands in the background. The blue sky is like a
dream. He continued – “Look at the transitions. The Soul Bowl was really good. It had a big fence around it but we just snuck in there and skated. I don’t recall ever being hassled there. It was pretty mellow. Back then, we were hitting the lip. Tiles, edgers and carving.” I asked TA about Logan Earth Ski and his sponsorship and contests. The waitress brought us our food and left us alone again.